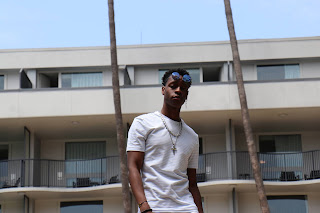 New Jersey. based young artist UMÉ has shared an overwhelming single called “3AM” featuring Toushai and produced by  Rard Beatz. The track is full of emotion, and it grabs your guts from the first notes.

We get hundreds of submissions every day and the majority of those submissions almost sound the same. But 3 AM has a unique sound that has a nostalgic vibe with a psychedelic touch.

The melodic song unveils infectious energy and the guitar riffs resonate with our soul. The voices are singular and unconventional.

UMÉ can be classified as a versatile, motivational, and creative young artist. Through his music, he wants to empower those who feel powerless, serve as a positive voice for the youth and encourage everyone to tap into their real feelings and emotions. He believes that’s the key to achieving your goals and anything you set your mind to.

The video is crisp and professional, with image quality on par with a television studio or indie theatrical release film. This rhythmic jam is ultra-smooth and Toushai’s visual and vocal expressiveness matches the level of her soulful delivery.

BEST HIP-HOP ALBUM OF THE MONTH: “NOWADAYYZ” BY SCOOB ROCK