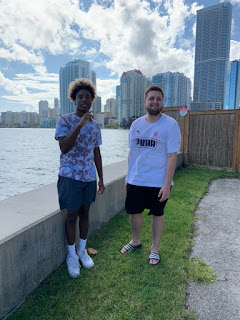 While we are entering a new year, our redaction is looking for the freshest sounds that will accompany this transition in the best way possible. So the latest track is the best choice for that mood.

‘You First’, by “ChrispyD & YKD Jah”  is probably one of the best tracks we’ve heard this week. their unusual artistic recipe caught our attention from the first note of his gem. Its beat is made by Michael L. It is Mixed & Mastered by Grammy-nominated producer Brian Eisner whose Grammy nomination came from Joyner Lucas’ song ‘I’m Not Racist’.

ChrispyD & YKD Jah are on the rise. While the sentiment can be overused these days, in case, from becoming a sought-after recording artist to harnessing a strong fan base, these passionate musicians have been undergoing tremendous growth this year, and their future looks bright.

You can tell that both of these loves performing and the deep, creative process of songwriting. That gives the song an added layer of charm. We know the duo for being productive, so we expect more songs in the coming weeks, and we just can’t wait for it. Thank you ChrispyD & YKD Jah for this musical moment.

“You First” is infectious from start to finish, press play now: